Inis Meain is the middle island of the Aran Islands. It has so much to offer, with beautiful scenery, numerous attractions and strong cultural heritage. Sailing from Doolin to Inis Meain is like traveling back in time. Soak up the rich and unique culture that Inis Meáin has to offer. We have the main attractions on Inis Meain for you to discover.

The Inis Meain Way stretches for 8km (5 miles) and lasts up to 2 and a half hours. You can rent bikes or walk this trail.

This was John M. Synge’s favorite spot, It has amazing views of Inis Mor and the entire island and sea.
In the distance you may see great pillars of spray sprouting up well inland out of “puffing holes”. There are still a few traditional thatched cottages to be seen; the thatch is made from rye grass which grows on the island. 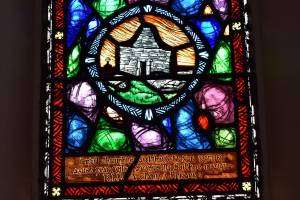 3. Inis Meain Knitwear Factory
Inis Meain Knitting Company was founded on the island in 1976 by Tarlach de Blácam and Áine Ní Chonghaile, inspired by the unique spirit, environment and heritage of the place.

The Knitwear Factory is one of the main sources of employment on the island. The factory produces high quality men’s fashion knitwear mainly for export to the most exclusive stores in Europe, Japan and Northern America.

There are two spectacular Stone Forts on the island dating back between the 1st-7th centuries AD. Dun Fearbhai and Dun Chonchuir or “Conor’s Fort” (also known as “The Black Fort”). 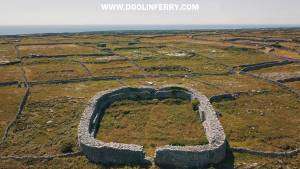 This translates to the ‘Bed of Diarmuid and Grainne’.
This is a wedge gallery grave of Neolithic or Early Bronze Age (4,000 BC). It was thought that it may be a place of ritual and a burial ground.
The name is a reference to the young couple who mythology tells us slept at these sites such as this wedge shaped tomb on Inis Meain, on their journey around Ireland, trying to escape from Fionn MacCool and the Fianna.

© Copyright Cliffs of Moher Cruises 2011 - 2022
Close
We use cookies to ensure that we give you the best experience on our website. If you continue to use this site we will assume that you are happy with it.AcceptDeclineCookies Policy
You can revoke your consent any time using the Revoke consent button.Revoke consent