Seabirds at the Cliffs of Moher

Seabirds at the Cliffs of Moher

The Cliffs of Moher holds the largest mainland colony of Puffins (1,365) in Ireland.
What do Puffins look like? Small comical bird, black and white evening suit and colorful bill
Nests: Underground in burrows and grassy summits near the Cliffs of Moher. 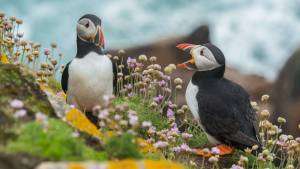 Wheatear/ Twite
This African migrant and the scarce Twite breed here in summer in small numbers.

Fulmar
The Cliffs of Moher contain the second largest colony of Fulmar in Ireland (3,560 apparently occupied sites). Fulmars have greatly expanded their range and numbers at the cliffs in recent times. Fulmars are present for much of the year
What do Fulmars look like? Looks like a gull but is actually related to the petrels, ‘stiff-winged’ flight with occasional flapping.
Where are they from? They originally come from the Artic and Iceland and began to colonise Ireland in 1911.
Nest: On the Cliffs of Moher.

Guillemot
The Cliffs of Moher is the 3rd largest site in Ireland for Guillemot (approx. 19,960 individuals). The Guillemot arrives in March/April.
How they lay their eggs: One egg is laid directly on the ledge.The pear shaped eggs and chicks have a precarious existence but they rarely fall off the nesting ledge.
What do Guillemots look like? Chocolate brown and white auk with pointed bill.
Nests: Tightly packed on cliff ledges. 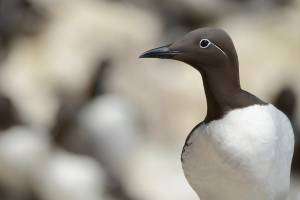 Skylarks
These can be seen all year round. Listen for the Skylark’s continuous stream of warbling song delivered from the air.
Usually seen as tiny dots in the sky, singing away.
Nest: on the ground concealed in small tussocks on coastal grasslands. .

Herring Gull
Small numbers of Herring Gull breed on the stacks or the upper ledges of the cliffs. Botulism appears to have affected Herring Gulls and a decline in their numbers has been noted at the Cliffs of Moher, this is in line with a nationwide trend.
What does a Herring Gull look like? Larger and more common than kittiwake. Have pink legs and silvery grey wings.
Nests: Common on all coasts and harbours.

Great Black-backed Gulls
These birds patrol the Cliff of Moher for a chance to encounter with an unguarded auk egg or chick.
What does a Great Black Backed Gull look like? Larger than lesser black-backed gull, with jet back wings and pink legs.
Nests: Common on all coasts and harbours.

Shags
Shags are also found breeding in small numbers, particularly in the caves.
What do Shags look like? Like a small cormorant but with a prominent crest and green eyes in breeding season, and steeper forehead.

Chough
Four pairs of chough breed from Hag’s Head to Doolin and are seen feeding on the short grass at the cliff top. Listen out for their harsh ‘cheeow’ calls.
What do Choughs look like? All- black with red legs and a down-curved red bill. A spectacular aerial acrobat, they are usually seen in pairs but larger flocks can form.
Nests: Mostly confined to sea cliffs.

Kittiwake
The cliffs are one of the top two sites in the country for Kittiwake (approx. 7,700 occupied nests). It is among the first birds to arrive in spring to breed.
What do Kittiwake’s look like? Small gull with a cry mimicking their name. Solid black wing-tips and legs.
Nests: Highly colonal cliff-nesters.

Razorbills
Razorbill numbers (7,700 individuals) in particular seem to have increased at the Cliffs and the site is of international importance for this species. 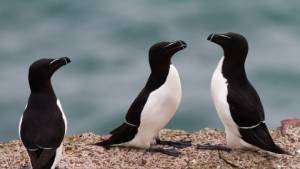 What do Razorbills look like? This seabird is recognized by its broader and heavy marked bill. Jet black and white auk with deep, blunt bill (compared to Guillemot).
Nests: In cliff crevices and under boulders at the Cliffs of Moher.